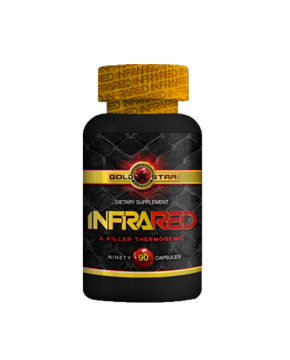 Infrared contains a handful of powerful ingredients widely known to help control cravings, boost mood, and, most important of all, kickstart fat loss. And trust us, if yIf you’ve been struggling to stick to your diet and shed those last few pounds

2-Aminoisoheptane (DMHA) – DMHA is structurally similar to DMAA and AMP Citrate (DMBA), all of which are classified as “psychostimulants. DMHA has been shown to boost levels of various monoamines in the body, most notably dopamine and norepinephrine. Once these two neurotransmitters get ramped up, you’ll experience pronounced increases in alertness, mood, and energy without feeling overly stimmed.

N-Acetyl L-Tyrosine – It’s the more heat stable form of the amino acid, L-Tyrosine. Typically, tyrosine isn’t very soluble in water or all that bioavailable in the body. However, through acetylation, both the solubility and availability of tyrosine is greatly enhanced. In regards to effects, NALT increases the production of two critical neurotransmitters in the body, dopamine and noradrenaline. Elevated levels of these compounds further heighten mood and focus, while decreasing stress and anxiety.

1,3,7-Trimethylxanthine – It can be found under a number of names, but at the end of the day, 1,3,7-Trimethylxanthine is good old caffeine, the backbone of any fat burner on the market. Little needs to be said about this staple ingredient, but it’s worth reminding everyone that it’s great for increasing energy, focus, and athletic performance.

1-Hydroxypholedrine – also can be found under the name oxilofrine, AKA real methylsynephrine. It’s a mixed-adrenergic agonist with an ephedrine-like pharmacological profile. The difference between regular synephrine and methylsynephrine is the addition of a methyl group which increases the compound’s affinity for beta-receptors. The major upside to methylsynephrine is its ability to activate beta receptors, particularly its beta-3 activity and an ability to induce lipolysis.